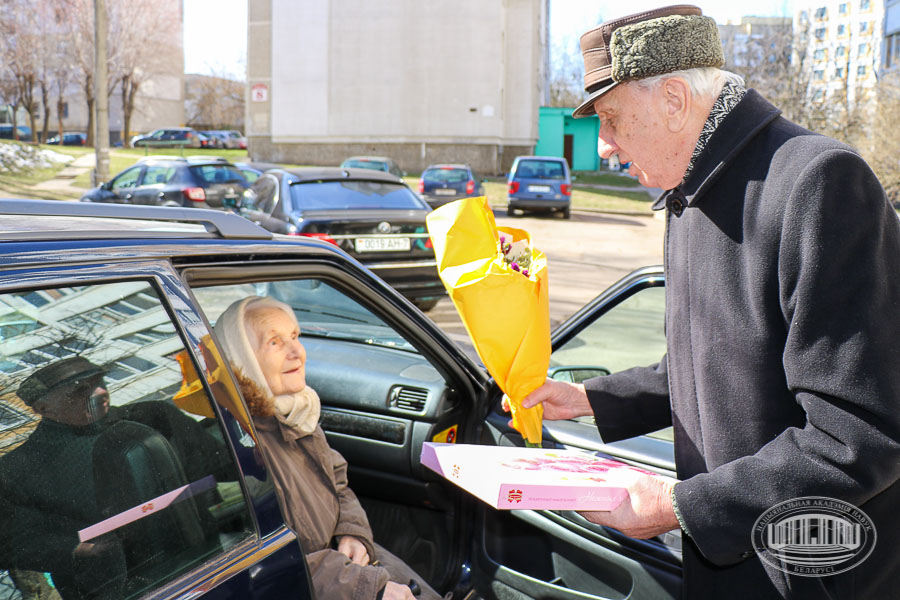 Valentina Neofitova, Veteran of the Great Patriotic Ware, former employee of the Institute of Plant Protection, Candidate of Biological Sciences reached the age of 100! She accepted congratulations from Nikolay Pavliukevich, the Chairman of the Council of Veterans, and Yuri Konashenko, the Academic Secretary of the Department of Agrarian Sciences of the NAS of Belarus, who wished her good health and a long life.

Valentina Neofitova is an expert in mycology and phytophathology. She studied mycological flora of the Murmansk region, disease of agricultural, ornamental and arboreal plants, biology of plant fungal disease causal agents, as well as fungal flora species composition; effects of fungicides and soil desinfectants, reasons for potato skin spot at the farms of the region. She developed control measures for plant diseases and provided advice to collective and communal farms of the region. Valentina Neofitova was awarded For Defence of Leningrad medal.

Valentina Neofitova was born on the 23rd of March 1920 in Pushkin town near Leningrad (Saint Petersburg). Her father Kirill was the Red Army officer and participated in the Civil War, and her mother Alexandra was a teacher. When Valentina was 10, her family moved to Leningrad. She graduated from school there and became a student of the medical and biological department of the Leningrad State University in 1938. She passed all examinations with excellent grades and was granted the Stalin’s scholarship. In May 1941, when she was a student and passed the 2-year exams, she undertook an internship on the outskirts of Leningrad. With the outbreak of the war, Valentina returned to Leningrad and immediately went to the military commissariat. She registered for military service, obtained a military service card, but didn’t join the Red Army. She was sent to construct defensive fortifications, where she dug trenches and antitank ditches. In December 1941, Valentina was called into the Red Army and joined the 50th frontline evacuation battalion of the 79th evacuation hospital as a medical corps lieutenant. The hospital admitting the wounded and sick people was established within the city, in the school building. The military units in the stronghold was in the same position as the city citizens. Hunger took its tithe of people... During the Great Patriotic War, Valentina’s father died near Leningrad, where he fought in a volunteer army, and her mother died of hunger. After the blockade was raised, Valentina returned to the University. Only 20 students of the biological department of 200 survived. In 1947, she went to “secretive work” to the Arctic –160 kilometres to the north of the Arctic Circle. Valentina Neofitova was in charge of laboratories for many years, she wrote 86 scientific publications in the domestic and foreign print media and has 6 authorship certificates of the USSR industry state committee. She was awarded with the Order of the Great Patriotic War of the 2nd Class and the Order of the Red Banner of Labour, medals For Defence of Leningrad and For Valorous Labour in the Great Patriotic War, and many others.