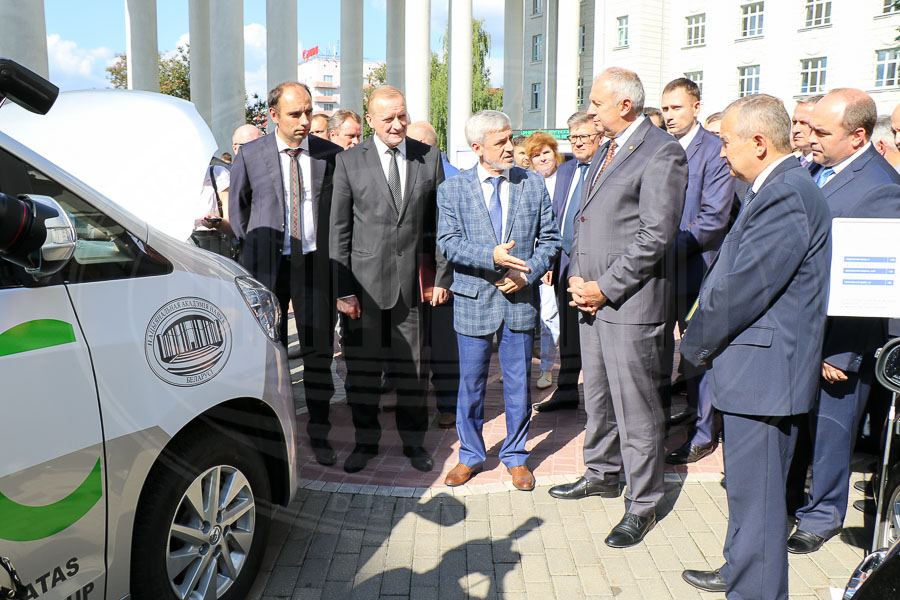 On 5 September 2019, Prime Minister of Belarus Sergey Rumas visited the National Academy of Sciences of Belarus and got acquainted with the new developments of Belarusian scientists.

Nineteen leading organizations of the Academy presented about 100 new scientific and technical innovative developments and technologies.

The Joint Institute of Mechanical Engineering of the NAS of Belarus demonstrated a pilot model of the Geely SC7 electric car, which is intended to be used as an intracity individual transport, in taxi services and car sharing. The Prime Minister was also shown an experimental model of a commercial electric vehicle (the base car kit is Joylong EF5), which is intended for use as an official vehicle or taxi and can carry five to seven passengers over a distance of 300 km. It has a quick charge system. According to scientists, the minivan pays off in three years of operation. The component base of the electric vehicle propulsion has been designed and manufactured in Belarus. Now, the institute’s specialists are developing a freight electric vehicle. The Prime Minister instructed to calculate the economic component of the use of Belarusian electric vehicles and compare with the costs of operating a standard car.

The Prime Minister was shown a line of small Belarusian electric vehicles such as electric bicycles, electric scooters, and electric motorcycles.The Research and Production Center of Multifunctional Unmanned Systems of the National Academy of Sciences of Belarus has developed a number of drones such as the Petrel, Busel M40 and Busel M50, as well as an unmanned aerial vehicle based on the airship. They are designed for video monitoring of the terrain, tracking moving objects with the ability to determine their coordinates and transmit the received video information over the air to the ground control point and other remote consumers. The Prime Minister was also told that, in addition to developments for the Ministry of Emergencies, the Center is also working on projects for the Ministry of Defense, namely on shock drones. The development of drones that can carry out registration and assessment of forest drying, and assess heat loss is also planned.

The Joint Institute for Informatics Problems demonstrated an experimental model of an office supercomputer with special software, as well as a system for remote monitoring of the state of crops. Specialists of the enterprise Geoinformation Systems of the National Academy of Sciences of Belarus spoke about the joint Russian and Belarusian high-resolution spacecraft, which is designed to collect space information about the Earth’s surface in the visible and near infrared ranges of the spectrum, as well as video information for solving state and commercial problems.

Sergey Rumas also got acquainted with the developments of the Scientific and Practical Center of the National Academy of Sciences on Agricultural Mechanization. The scientists of the center demonstrated such results of their work as a flax ribbon wrapper, a semi-trailer transport and technological system on a unified triaxial chassis with a lifting capacity of 25 tons for applying solid organic fertilizers, a semi-row berry harvester for picking berries of currant, chokeberry, gooseberry, and rosehip.

Scientists of B.I. Stepanov Institute of Physics of the National Academy of Sciences of Belarus spoke about their unique developments, including an air plasma jet generator for sterilizing and accelerating wound healing. A terahertz spectrometric complex for non-contact analysis of food products and the detection of counterfeit products, drugs, hazardous substances and weapons was also presented.

The NAS of Belarus has scientific and practical centers, laboratories, and councils in various fields of scientific activities, including joint ones with leading manufacturers (BELAZ, MAZ, MTZ, MMZ, and Integral). A system of more than 70 interdisciplinary research laboratories and promising research centers has been formed. The productions of the 5th and 6th technological structures have been created and are functioning now; system projects which ensure the development of both traditional and fundamentally new for Belarus activities are being implemented. A complete chain from ideas and basic research to practical development, from the creation of experimental or pilot production to sale of finished innovative products has been built.