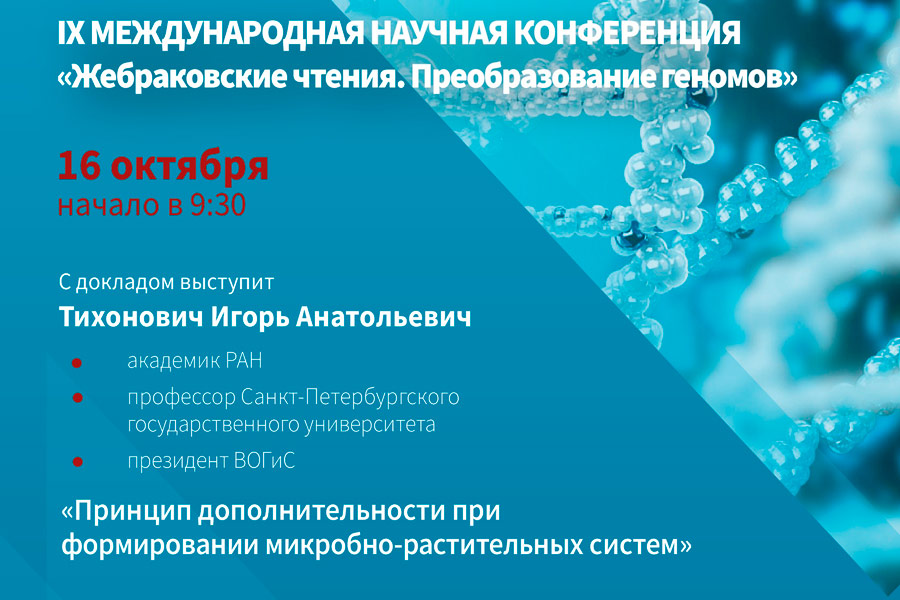 The 9th International scientific conference "Zhebrakov readings. Genome transformation" under the auspices of the Belarusian Society of Genetics and Breeders will take place on 16 October 2019.

The forum was organized in memory of the outstanding genetic scientist, academician Anton Romanovich Zhebrak and has been held since 2007. This year, the well-known Russian scientist academician Igor Tikhonovich, Scientific Director of the All-Russian Research Institute of Agricultural Microbiology, President of the Vavilov Society of Geneticists and Breeders, was invited as a guest lecturer. He is a Laureate of the Russian Federation Government Prize in science and technology (2013) and the Vavilov Award for outstanding scientific results in science and technology (2009). Research interests include: plant genetics, microbiology, plant physiology, symbiogenetics, biotechnology of plant-microbial systems, metagenomic analysis of microbial communities, biotic and abiotic stress, and biological products.

The topic of the report is "The principle of complementarity in the formation of microbial and plant systems."

Genetics of microbial-plant symbioses has been developing for more than 70 years, but only the work of the last decade allowed us to start clarifying their genetic nature. It is shown that symbiosis is based on the deep integration of gene systems of partners, which leads to the formation of supraspecific systems of heredity — symbiogenomes. The patterns of their functioning and evolution go far beyond the canonical concepts of variability and heredity, which were formed on the basis of the study of free-living organisms. Precisely genetically integrated systems make it possible to implement such phenomena ("banned" by classical evolution theory) as interspecies altruism and inheritance of traits, acquired by organisms during individual development. Clearing the foundations of the organization and evolution of the symbiogenome opens up fundamentally new opportunities for the development of a new direction of biology — symbiotic design aimed at creating highly productive supra-species complexes. This gives broad prospects for developing environmentally sustainable agriculture and crop production, where the key adaptive functions of crops are performed by microorganisms, optimizing nutrition, stress resistance and plant protection.

It is possible to register in advance by sending the participant’s name and place of work to igc_market@igc.by

Participation in the event is free of charge.