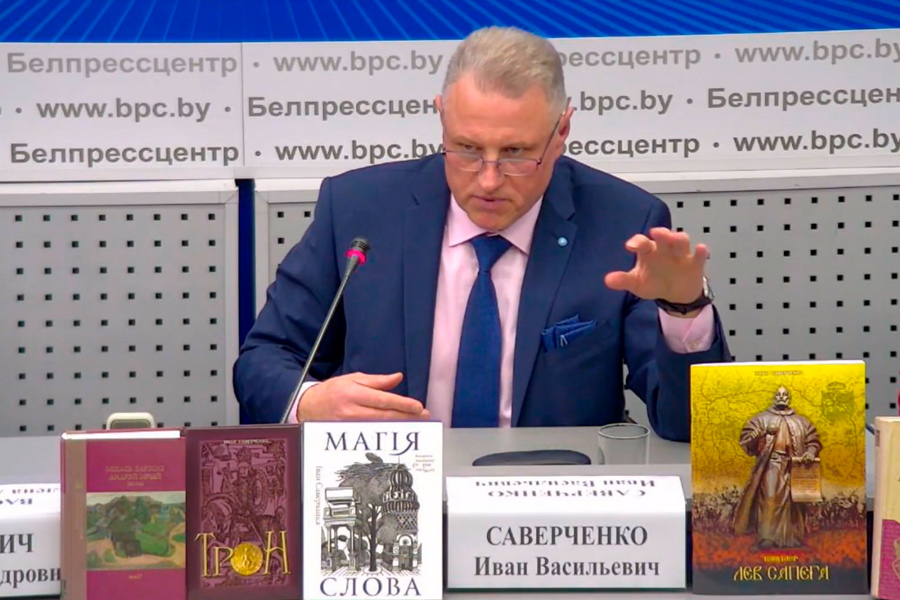 On April 1, the National Press Centre of the Republic of Belarus held a press conference of the subject: Literature in Historical and Cultural Dialogue of Belarusian and Russian People. Presentation of New Thematic Publications.

The press conference covered both new and well-known continued publications of the Institute scientists. In particular, Ivan Saverchenko highlighted the subject of historical and cultural dialogue of the Belarusian and Russian people. “The Throne” book offering insight into Belarusian literature of the 10th – 13th centuries, published last year is dedicated to this subject. “The publication comprises a cycle of short novels. It is a comprehension of political, economic and social relations in the times of Ragvalod, Ragneda, Vseslav the Sorcerer. Specific historical subjects are used to show deep relations between Belarusian and Russian, East Slavic peoples”, Ivan Saverchenko said. “In this book, I presented historical-artificial reconstruction of those deep interrelation processes between our peoples, cultures and lands”.

“Chancellor Lew Sapieha” book was published this year. The publication describes activities of politician and diplomatist of the Grand Duchy of Lithuania Lew Sapieha (1557-1633), his contribution into building of rule-of-law state, creation of Statute of the Grand Duchy of Lithuania 1588, and sovereignty and independence strengthening. “Our lands were an intermediary between Europe and Muscovy, that is why I depicted these hard times through a historical and documentary writing. I have been working on it since 1992. The book is intended for schoolchildren and students”, the Institute director said.