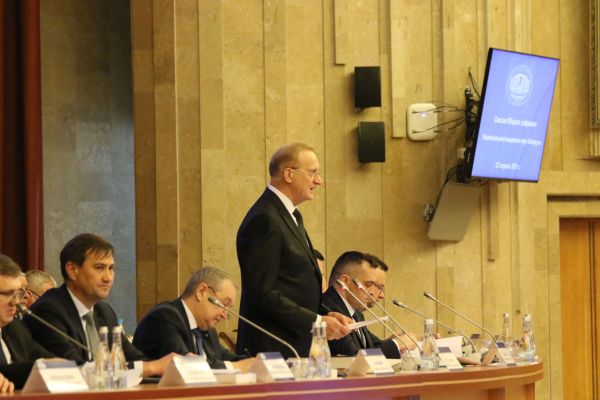 Before the start of the session of the General meeting, the Chairman of the Presidium the NAS of Belarus, Vladimir Gusakov, told reporters that a lot had been done over the previous year and five years. “In private, a new project of the Earth remote sensing spacecraft has been developed, now we are ready to start reading it. In Antarctica, our expedition has successfully completed its mission and is already returning back. In agriculture, a number of the latest varieties of plants have been bred, machines work that are not inferior to foreign analogues in technology, etc. We demonstrated our developments in the field of electric transport, nanomaterials and in various industries, including energy storage, etc.” – Vladimir Gusakov explained.

In addition, seven unified priorities in the field of science and scientific and technical activities were approved, 12 programs of fundamental research for the next five years were developed, which include both the above direction and broader tasks. “We certainly take into account the needs of the state, the proposals on the Government and, of course, the instructions on the Head of the state, which are put for the Academy of Sciences. In general, we will work in the context of the tasks of the 6th Belarusian People’s Congress,” the Chairman of the Presidium the NAS of Belarus emphasized.

Speaking about plans for the near future, Vladimir Gusakov noted that this year it is planned to launch projects on hydrogen energy, the creation of a supercapacitor (energy storage). “We are developing new generation drugs for cancer, antihypertensive effects, as well as a number of biological drugs to regulate plant growth. In addition, it is planned to create the latest varieties of agricultural crops, work has begun on breeding a new breed of cattle,” he added.