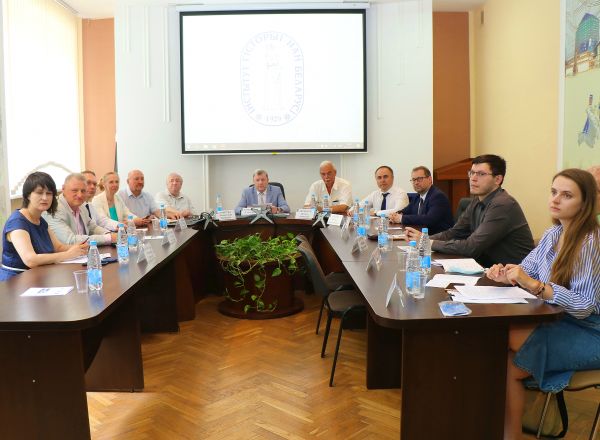 On July 1, the Institute of History of the NAS of Belarus hosted a round table “Humanitarian Science for the Belarusian society” dedicated to the Independence Day of the Republic of Belarus be read. The event was attended by representatives of scientific organizations of the Department of Humanities and Arts of the NAS of Belarus.

As Academician-Secretary of the Department of Humanities and Arts of the NAS of Belarus Alyaxandr Kavalenya noted, the Belarusian people have always strived for the development of the national culture and the acquisition of statehood, which Belarusian scientists clearly and convincingly showed in the five-volume edition “История белорусской государственности”. “Experience shows that, despite the numerous upheavals that constantly accompanied the life of the Belarusian people, they were not only able to preserve and curry through the millennia their language, spiritual and cultural traditions, but also managed to build their statehood. Today, the bell Russian society is confidently building a sovereign state, developing national spiritual and cultural traditions, science, socio-political system and socio-economic sphere,” stressed Alyaxandr Kavalenya.

At the meeting of the Round Table, it was noted that in modern conditions of civilizational development, the humanities are obliged to strengthen their influence on the state of spiritual, cultural, socio-political and socio-economic development of the individual. It was on these complex issues that the scientists of the Academy of Sciences worked in 2016-2020, fulfilling the tasks the state research program “Economy and Humanitarian Development of the Belarusian Society”. Today, fruitful research continues in the new program “Society and Humanitarian Security of the Belarusian State”.

Over the years of independence of our country, humanitarians have significantly intensified scientific research and not only at covering the history of the Belarusian people, but also at straightening interethnic and interfaith relations, developing culture and straightening the Belarusian statehood. Such fundamental publications have been prepared and published us: «Беларусы», «Гарады і вёскі Беларусі», «Нарысы гісторыі культуры», «Арфаэпічны слоўнік беларускай мовы», «Вклад белорусского народа в Победу в Великой Отечественной войне», «Страна в огне», the first in Europe «Вялікі гістарычны атлас», the first and only around the world 37-volume «Гістарычны слоўнік беларускай мовы», original editions «История белорусской государственности», and «Республика Беларусь  25 лет созидания и свершений». In 2016-2020, by scientists of the Department of Humanities and Arts of the NAS of Belarus published more than 20,000 scientific works, of which almost 4500 were published in foreign scientific publications. 2066 books have been prepared and published, including 626 monographs, 248 reference books and encyclopedias, 403 collections of scientific papers.

Press-Service of the NAS of Belarus