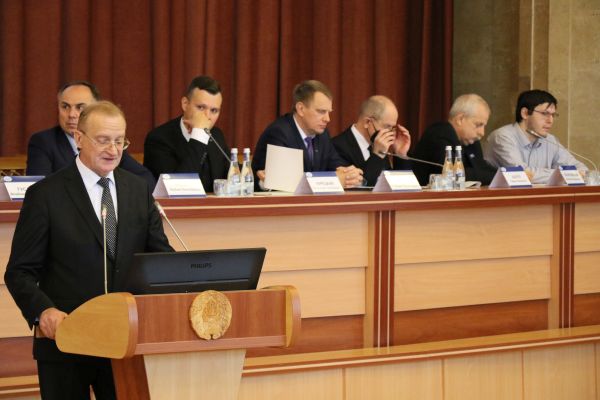 The interdisciplinary round table "WE ARE TOGETHER" was held, dedicated to the Day of National Unity.

On September 17, 2021, an interdisciplinary round table was held at the NASB under the slogan "WE ARE TOGETHER ", dedicated to the Day of National Unity. The event was attended by leading scientists of the Academy of Sciences, representatives of public organizations of the country and students.

Speaking to the participants of the Round Table, the Chairman of the Presidium of the NAS Vladimir Gusakov noted.” In a difficult modern environment, we should continue to work to restore the historical truth as an integral part of the state policy in the field of preserving the historical memory of the Belarusian people and educating the younger generations. We should not forget the tragic lessons of history, direct our efforts to strengthen the independence of our state - the Republic of Belarus, contribute to the strengthening of interethnic and interfaith unity. Only a consolidated society is able to withstand external and internal threats and preserve independence, sovereignty and state integrity”, said Vladumir Gusakov.

A book exhibition was launched during the event “Reunification of the Belarusian people into a single state: the history of Western Belarus’s accession to the BSSR.” The participants were presented by employees of scientific organizations of the Academy of Sciences with author's poems dedicated to the Motherland and the Belarusian people, the music chapel of the Center for the Study of Belarusian Culture, Language and Literature of the National Academy of Sciences of Belarus, children's creative groups.