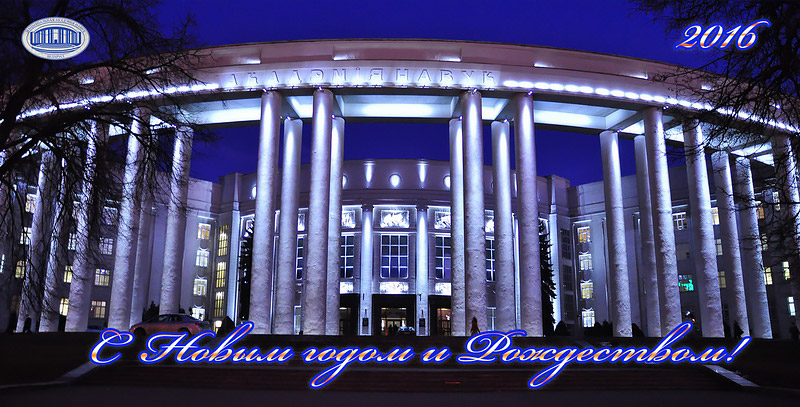 The year 2015 is coming to an end. It was a year, which brought new achievements and discoveries, a year of strengthening the current positions and further development.
We have much to be proud of. This year was marked by landmark events in the life of our country and the National Academy of Sciences of Belarus.
In 2015 the Belarus presidential election was held, which was won by Alexander Lukashenko, who pays key attention to the development of science and innovation. The Academy of Sciences of Belarus gave active support to his candidature, because we feel support in many endeavors. Our choice is guarantor of stable and successful development of the state and science.
This year completes another five-year period, which was associated with the implementation of a series of science and technology programs. In many respects it was the year 2015 that played a decisive role in achieving our results.
The Academy of Sciences continues to progress. On behalf of the Head of the state, a system of clusters (centres) is being established, which is aimed at promoting the leading positions of the Republic of Belarus in science and technology, supporting and developing the national scientific schools in the main areas of research and development. The established centres (clusters) will facilitate closer cooperation among the stakeholders from academic, university and industrial science, will foster a focused and comprehensive approach to addressing large-scale tasks and implementing groundbreaking global research projects.
In 2015 we took big steps forward in the principal directions. We broadened our international contacts, complemented them with new agreements and contracts. Delegations representing the organizations of the Academy of Sciences of Belarus went to different corners of the world. Representatives of the Academy’s institutes, particularly young scientists, became winners and runners-up of many high-profile international contests in various categories. The National Academy of Sciences Expo held in September 2015 showed the great capacities and unlimited possibilities of the Academy’s research institutions. The Expo gave a decisive answer – the Academy of Sciences is actively progressing and is in demand in the society.
The year 2015 marked the 70th anniversary of the Great Victory. Not only did we honor the heroic deeds of the warriors who sacrificed their lives in the fight for the freedom and independence of our homeland. The scientists of the NAS of Belarus enhanced the memories of those, who had not returned from the battlefields, with new research works, discovered previously unknown pages of the War’s history.
This year the Academy of Sciences of Belarus became the focus of the youth science of the Eurasian Economic Union. The First Young Eurasian Scientist Forum gathered researchers from many countries. In the Year of Youth the YES-Forum and the 12th International scientific conference “Youth in Science 2015” became landmark events in the life of the country.
The upcoming year 2016 offers new challenges to Belarusian science. Among them are increasing the competitiveness of domestic products, search for inclusive science-based approaches and solutions in the industrial policy and import substitution, further improvement of science and technology management. The Academy must continue to form new technological structures and provide breakthroughs in the field of theoretical, exploratory and basic research to complete the series of practice-oriented developments. I am confident that the research teams will successfully cope with these tasks.
Today science is important to the Belarusian economy like never before. Only scientific bases and innovative solutions can make it possible to accomplish the strategic objectives of the spiritual and cultural, social and economic development of the sovereign Belarus.
Dear friends!
On behalf of the Presidium of the National Academy of Sciences of Belarus and myself I cordially wish you a Happy New Year and a Merry Christmas. Thank you for the fruitful work and I wish each of you health, vitality and success!
May the new year bring more happy memorable events into your lives. May your homes have well-being, understanding, joy and love.