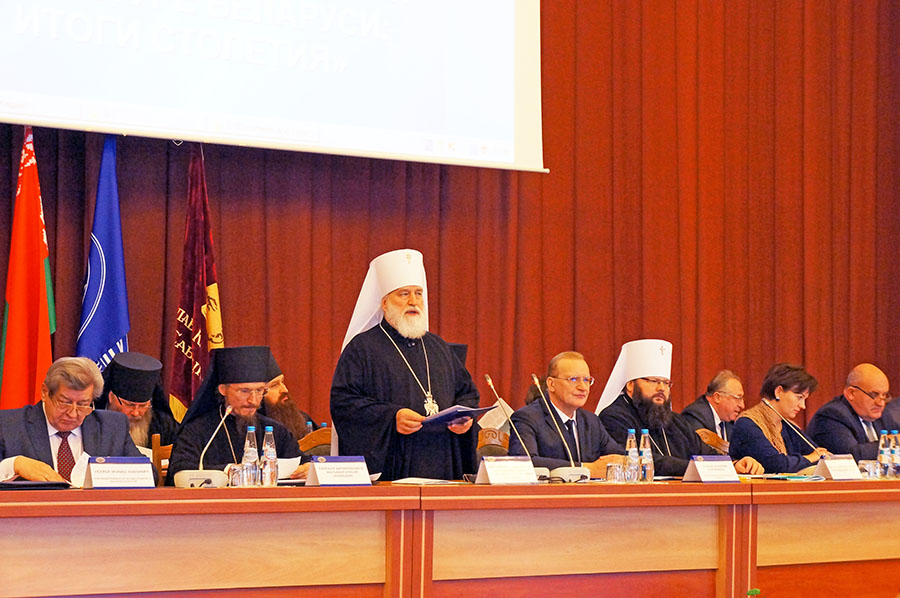 On December 1, 2016 grand opening of the Second Belarusian Christmas Readings "1917-2017. Orthodoxy in History and Culture of Belarus: Results of the Century" was held at the NAS of Belarus. In accordance with the Decree of the Council of Ministers of the Republic of Belarus No. 51 dated January 25, 2016 the Second Belarusian Christmas Readings were included in the Republican Year of Culture events calendar for 2016. Topical problems of spiritual and moral life of the Belarusian society, of its cultural heritage, as well as of historical retrospective of the past century have been at the focus of the Readings.

Priests, representatives of authorities, cultural workers, scientists, representatives of power structures, heads and teachers of educational institutions, medical and social workers, Sunday school teachers, students, and representatives of other activities were invited to participate. As part of the Second Christmas Readings grand opening of the photo exhibition dedicated to the 70th anniversary of His Holiness Patriarch of Moscow and All Rus Kirill was held at the National Academy of Sciences of Belarus. The celebration was attended by Metropolitan of Minsk and Zaslavl Pavel, Patriarchal Exarch of all Belarus and Metropolitan of Smolensk and Roslavl Isidor. As the Chairman of the NASB Presidium Vladimir Gusakov said in his welcome address, traditions of close cooperation of the state with the Belarusian Orthodox Church under the Agreement from 2003 demonstrated a productive mechanism and a high level of strategic cooperation. That also concerned the partnership of the Academy of Sciences and the Church, which aimed at strengthening spiritual and moral development of society, preservation and augmentation of its historical and cultural heritage, upbringing younger generation, continuity of traditions and spiritual consolidation of the Belarusian nation.

The Second Belarusian Christmas Readings are held in Minsk on December 1-2, 2016. The Forum is organized by the Belarusian Orthodox Church with the support of the National Academy of Sciences and the Ministries of culture, health, and education.