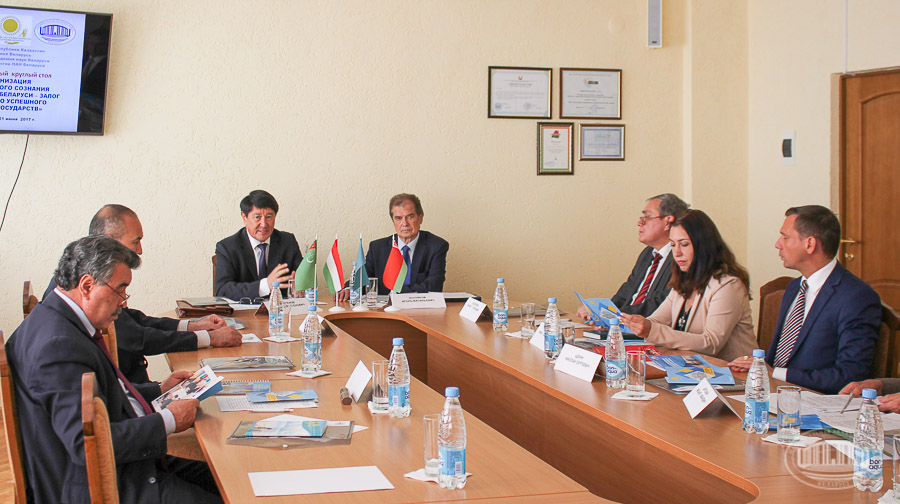 Discussion on public consciousness modernization with ambassadors of Kazakhstan, Turkmenistan and Republic of Tajikistan held at NASB Institute of Sociology

The International round table "Modernization of Public Consciousness in Kazakhstan and Belarus as the Guarantee of Further Successful Development of the States" was held at the NASB Institute of Sociology on 21 June 2017. It was attended by Ergali Bulegenov, Ambassador Extraordinary and Plenipotentiary of the Republic of Kazakhstan to the Republic of Belarus; ambassadors of Turkmenistan and the Republic of Tajikistan; Igor Kotlyarov, Director of the NASB Institute of Sociology; Belarusian political scientists, sociologists, and other specialists.

The round table participants discussed new initiatives of Nursultan Nazarbayev, President of the Republic of Kazakhstan, Foreign Member of the National Academy of Sciences of Belarus, which were set out in his program article “Course towards Future: Modernization of Public Consciousness” (dated April 12, 2017).

In his speech, Mr. Ergali Bulegenov outlined the main positions of that program article, and noted that realism and pragmatism were to become the slogan of the next decades. He also stressed the importance of knowledge, significance of evolutionary development of society, the need to preserve culture, history, language, and develop humanitarian knowledge, study local lore, etc.

Igor Kotlyarov, Director of the NASB Institute of Sociology, noted the similarity of those positions with the initiatives, which had sounded in the recent Message of the President of the Republic of Belarus to the Belarusian people and the National Assembly, and had been adopted in the Belarusian society. He also emphasized that the above-mentioned positions somehow came in contact with the cultural code of the nation, which Belarusian sociologists tried to decipher.