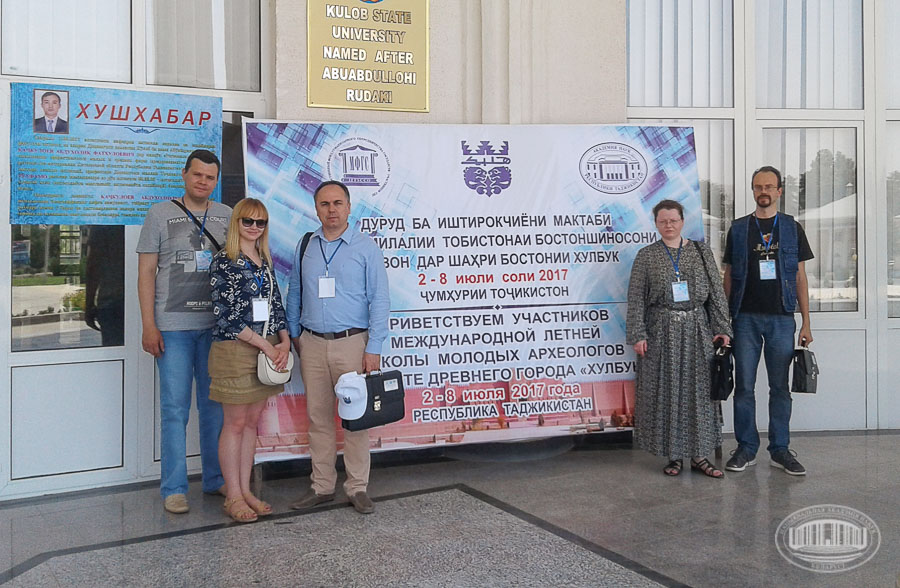 On 2-8 July 2017, a delegation of the NASB Institute of History took part in the International Summer School of Young Archeologists of CIS Member States on the site of the ancient Hulbuk town in the Republic of Tajikistan. The event was supported by the Interstate Humanitarian Cooperation Fund of the CIS member states and the Academy of Sciences of the Republic of Tajikistan.

The delegation of the Institute of History of the National Academy of Sciences of Belarus, led by Vadim Lakiza, Deputy Director for Science, included young archaeologists, researchers Anastasia Kostyukevich, Pavel Kenka, Maria Tkacheva, and Stanislav Yuretsky.

Representatives of the NASB Institute of History told colleagues about their achievements in the Neolithic and early Middle Ages periods of Belarus, the distribution of imported items on the territory of the Polotsk land, the fieldworks of young archaeologists. The Vadim Lakiza’s report, devoted to the present state of domestic archeology, as well as issues relating to protection of historical, cultural and archaeological heritage, was of particular interest. As a result of the discussion, common problems in monuments preservation and struggle against "black diggers" were revealed for all the CIS countries. The scientist announced that the Institute of History had requested to hold such a school in Belarus.

The assimilation of experience in scientific cooperation and in search for sources of research projects funding as well as the practical use of the results obtained have been an important result of participation in the international school for young scientists and archeologists.