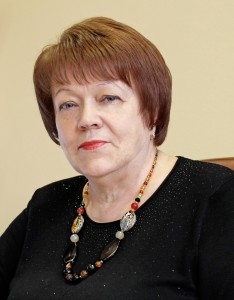 Emilia I. Kolomiets is a well-known scientist in microbiology and biotechnology, corresponding member of the National Academy of Sciences of Belarus, Doctor of Biological Sciences, and Honored Worker of Science of the Republic of Belarus. It was she who formed and actively develops a national scientific school on study of the biogenesis of biologically active compounds with antimicrobial effect and on the creation of biological means of plant and animal protection. The most important results of Emilia Kolomiets scientific work were the creation of a collection of industrially valuable microorganisms that are promising for the development of biopesticides, biodesinfectants, probiotics, and fodder additives; development of original technologies for the creation of biological products with phyto-protective, disinfectant, growth and immunostimulating activities.

Emilia I. Kolomiets is a good organizer of science. She initiated and developed a number of programs of national and interstate importance in the field of biotechnology. She is a member of the Council of Founders of the Eurasian Technological Platform EurasiaBio, the Council of the Federation of European Microbiological Societies, and the vice-president of the Eastern Palaearctic Regional Section of the International Organization for Biological Control.

At the initiative of Emilia Kolomiets, the center for analytical and genetic engineering research, experimental and industrial production of microbial preparations, laboratory and experimental area for the separation and purification of lactoferrin, technological line for production of enzymes for the biosynthesis of medicinal substances have been created on the basis of the Institute of Microbiology of the National Academy of Sciences of Belarus. The construction of a biotechnology research and production center for the production of dry forms of biological products with high export potential is being completed. This ensured the complexity of ongoing research and development, thus the Institute was put on the National Honor Roll for achieving the best results in socio-economic development among scientific organizations in 2006, 2015, 2016, as well as to the Honor Roll of the NAS of Belarus following the results of activity in 2012, 2015, and 2016.

Emilia I. Kolomiets is the author of over 460 scientific works including 4 monographs, 357 articles, 22 patents for inventions. All scientific and technical developments carried out under her leadership and with her direct participation have been successfully implemented in production and are in demand not only in the Republic of Belarus, but also abroad.

The title of "The Scientist of the Year of the National Academy of Sciences of Belarus" will be awarded annually on the eve of the Day of Belarusian science.