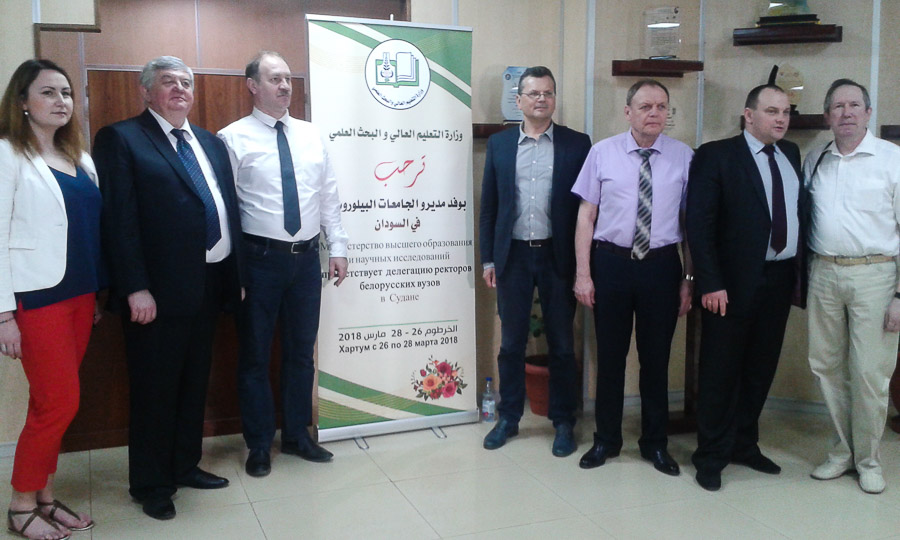 The NAS of Belarus signed memorandums of understanding with the Sudan University of Science & Technology, the University of Western Kordofan, the Blue Nile University, the Open University of Sudan, and the African Science Park (Sudan). Ihar I. Hancharonak, Rector of the Researchers Training Institute, acted on behalf of the National Academy of Sciences of Belarus during the visit of delegation of heads of eight Belarusian universities to Sudan in the framework of the Belarus-Sudan University Forum (March 27–28, 2018).

The agreements reached are to provide the students, postgraduates, and faculty staff academic mobility, hold joint scientific research, including the programs Erasmus+ and Horizont 2020, and exchange information and technologies. Sudan showed special interest in the opportunity of training researchers in nuclear physics, petrochemistry, and agricultural sciences.

The working plan of the Belarusian delegation included a meeting with the Minister of Higher Education and Scientific Research of Sudan, a representative of the Committee on Overseeing Sudan Relations with BRICS countries, the Deputy Agriculture and Forestry Minister of Sudan. The Belarusians also visited the leading universities of Sudan. Ihar I. Hancharonak made a presentation of the Researchers Training Institute activities, and showed it as a republican center training intellectual elite and realizing the mission of the Academic University.

Signing of the memorandums deapened the dialogue on cooperation between Belarus and Sudan in science and technology. On 30 August 2017, the leaders of the National Academy of Sciences of Belarus held negotiations with members of the parliamentary delegation headed by Ibrahim Ahmed Omer, Chairman of the National Assembly of the Republic of Sudan. The negotiations took place at the NAS of Belarus. Prospects of development of the scientific and technical cooperation between Sudan and the organizations of the National Academy of Sciences of Belarus were outlined. On 7 August 2017, the Sudanese delegation headed by Dr. Sumaya Mohamed Ahmed Abu-Kashawa, Minister of Higher Education and Scientific Research of the Republic of Sudan, visited the NAS of Belarus. On 9 August 2017, after the visit of a Sudanese delegation to the NASB Researchers Training Institute and negotiations, the sides signed three agreements on cooperation in higher education, training researchers, and academic mobility of faculty staff and students with three leading universities of Sudan.