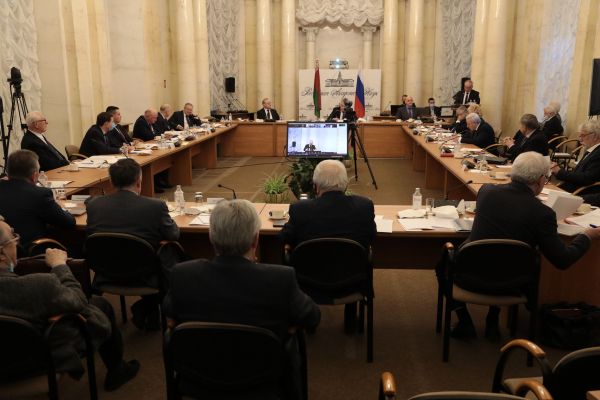 A President of the RAS, Academician Alexander Sergeev and the Chairman of the Presidium of the NAS of Belarus, Academician Vladimir Gusakov addressed the audience with introductory remarks. As Vladimir Gusakov noted, “it is especially important that we found an opportunity to meet and discuss key issues of our joint activities, even at such a difficult time in the fight against a pandemic, when the role of signs cannot be overestimated. Joint meetings of our Academies allow us to analyze in detail the current results of cooperation and create a basis for further productive interaction in the field of science and technology of our countries. Russian scientists are traditionally among the closest partners of our National Academy of Sciences, and we believe that continued close cooperation will create the latest world-class technologies”.

Thus, the scientists of Belarus and Russia considered the most important results of the activities of the Inter-Academic Council on the problems of the development of the Union State and the implementation of programs of the Union State, promising projects of programs. This scientific elite of the two countries discussed the expansion of cooperation within the framework of the International Association of Academies of Science (IAAS), the headquarters of which operates on the basis of the NAS of Belarus. It was proposed to create a found for the support of science at the International Association of Academies of Science. Today IAAS unite 26 organizations from 16 countries, including Russia, Azerbaijan, Belarus, Ukraine, China, Mongolia, Moldova, Montenegro, Georgia, Vietnam.

Particular attention was paid to the coordination of the activities of the RAS and the NAS of Belarus in the field of new medical technologies to solve the problems of prevention and elimination of the consequences of large-scale epidemics. The meeting highlighted the main components of successful cooperation between the institutions of the NAS of Belarus and the organizations of the RAS: the multi-vector nature academic science, the presence of scientific schools and young scientists, the possibility of cross-border partnership of specialists. Cooperation between the RAS and the NAS of Belarus will be intensified within the framework of the IAAS Scientific Council on Virology, videoconferences will be held on a regular basis on various issues related to the epidemiological situation.

The Council of Young Scientists of the RAS and the NAS of Belarus have been instructed to ensure the affective continuation of cooperation in the implementation of joint research projects, as well as the conduct of joint scientific, technical and scientific organizational events – forums, scientific seminars, schools for young scientists, round tables, etc.