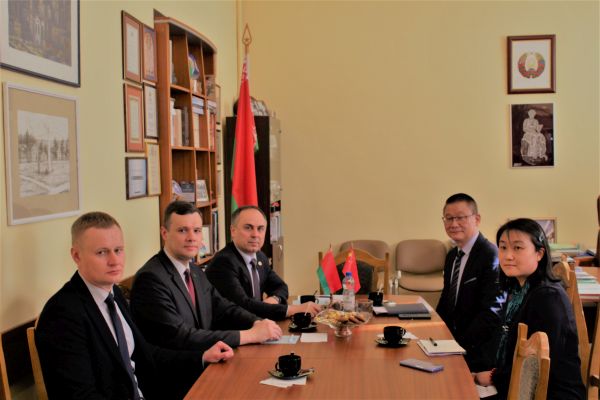 Meeting with the Counselor of the People’s Republic of China

The Institute of History of the National Academy of Sciences of Belarus hosted a meeting with Counselor of the People’s Republic of China Lo Shixiong.

Director of the Institute V.L. Lakiza spoke about the cooperation between the scientists of the two countries, already completed joint scientific projects, the book «Belarus: Pages of History» published in Chinese, as well as the new monograph by the staff member of the Institute I.Yu. Voronkova «Belarus and China: сommon pages of the military history (1921–1960)».

During the meeting both sides discussed the future prospects for bilateral cooperation in the scientific and educational fields and also spoke about the need to intensify the joint work to strengthen and deepen professional and friendly relations, organize the joint scientific and practical events, prepare publications on the significant events for the countries, which is especially important in the Year of Historical Memory.

Several books were donated to the Embassy of the People’s Republic of China, including «Belarus and China: common pages of the military history (1921–1960)», «Polatsk in the history and culture of Europe», «Archaeological scientific and museum exposition of the National Academy of Sciences of Belarus».