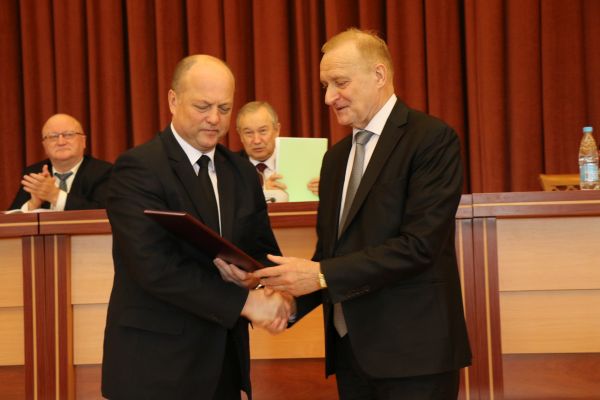 The Central Botanical Garden is 90 years old. In connection with the anniversary, the congratulations to the staff and veterans were sent by the President of the Republic of Belarus Alexander Grigoryevich Lukashenko. Chairman of the Presidium of the National Academy of Sciences of Belarus Vladimir Gusakov presented a congratulatory address to the director of the Central Botanical Garden Valentin Shatravko.

The congratulation, in particular, reads: «I cordially congratulate you on the 90th anniversary of the founding of the Central Botanical Garden of the National Academy of Sciences. Today it is a real brand, a national treasure of our country. Thanks to the preservation of traditions, professionalism and the tireless work of many generations of employees of the botanical garden, we admire the magnificent collections of the various plants all year round. Let not only residents, but also numerous guests of Minsk continue to rest on the territory of this picturesque green oasis of the capital on weekdays and holidays».

Today it is a unique natural object of the landscape gardening art, combining the functions of a metropolitan landmark and the most important cultural, educational, ecological, educational and educational center. The area of the botanical natural monument of the republican significance «Central Botanical Garden» is 93 hectares. CBG is the largest center in the country for the conservation of the biodiversity of the living plants, a leading scientific institution in the field of introduction, acclimatization, physiology, biochemistry, biotechnology and plant ecology, and environmental protection. It is one of the largest botanical gardens in Europe both in terms of area (93 hectares) and the composition of the plant collections (more than 15,000 items).