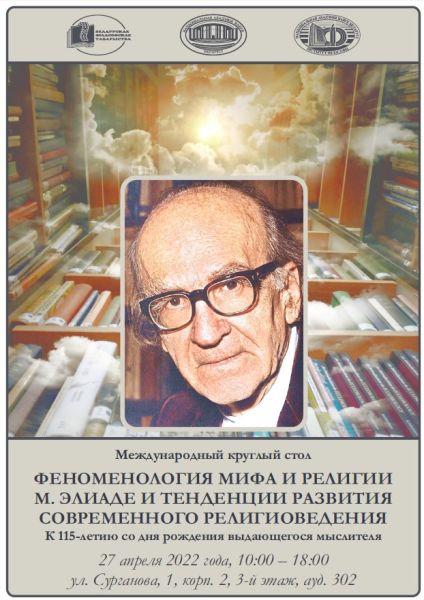 On April 27, 2022, the International Round Table dedicated to the 115th anniversary of the birth of Mircea Eliade will be held at the Institute of Philosophy of the National Academy of Sciences of Belarus

The round table is dedicated to M. Eliade (1907–1986), an outstanding religious scholar of the 20th century, the founder of the Chicago School of the Comparative Religion, who made a significant contribution to the development of the modern religious studies, the philosophy of myth and the humanities in general, as well as to the theoretical consideration of the modern problems of religious knowledge.

This round table is the first event of such kind in the Republic of Belarus. Its goal is to unite the scientific intentions of the scientists from different countries to discuss the concept of the philosophy of myth and religion by M. Eliade in the context of the development of phenomenology, epistemology and ontology of religion, the explication of the specifics and directions of development of the modern religious and philosophical knowledge, various religious discourses and schools. Within the thematic framework of the round table, the philosophical and cultural significance of the legacy of the outstanding Romanian religious scholar, philosopher and writer will be revealed, the possibilities of the creative use of his ideas both for the development of the humanitarian scientific knowledge and for the understanding the pressing problems of the modern civilization will be considered. Well-known scientists from Russia and Belarus will take part in the work of the round table.

The round table will be held in a face-to-face format. A link to connect remotely is available upon request. To obtain it, please contact kuksachou@philosophy.by

We invite everyone to attend this event.