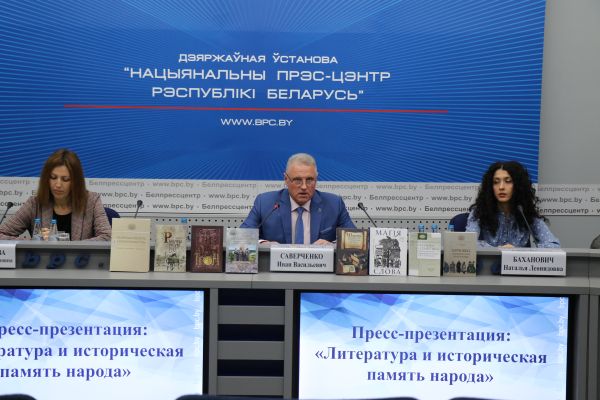 On October 2, 2022, a press presentation «Literature and historical memory of the People» was held at the National Press Center of the Republic of Belarus.

Director of the Institute Ivan Saverchenko presented several self-authored publications. These are the books «Guardians of the Fatherland: princes and magnates of the Belarusian land», «Knights of Belaya Rus», which was also published this year, and the book «Magic of the Word», which presents creative portraits of almost 30 writers of old times.

In addition to fiction, the Institute also produces scientific publications. «Belarusian literature and literary studies» is among them. «This work will be useful to a wide range of readers, and not only to scientist», Academic Secretary of the Institute of Literary Studies Lyudmila Ikonnikova says.

In addition, the presentation demonstrated the book «The Faces of the Other in the multilingual literature of Belarus of the 19th century» by Natalia Bakhanovich, a Researcher at the Institute. This publication examines the ideas of Belarusians of those times about other peoples, countries, confessions. The focus is on both close ethnic groups (Poles, Russians, Ukrainians) and distant or unrelated (Jews, Germans, French, etc.).