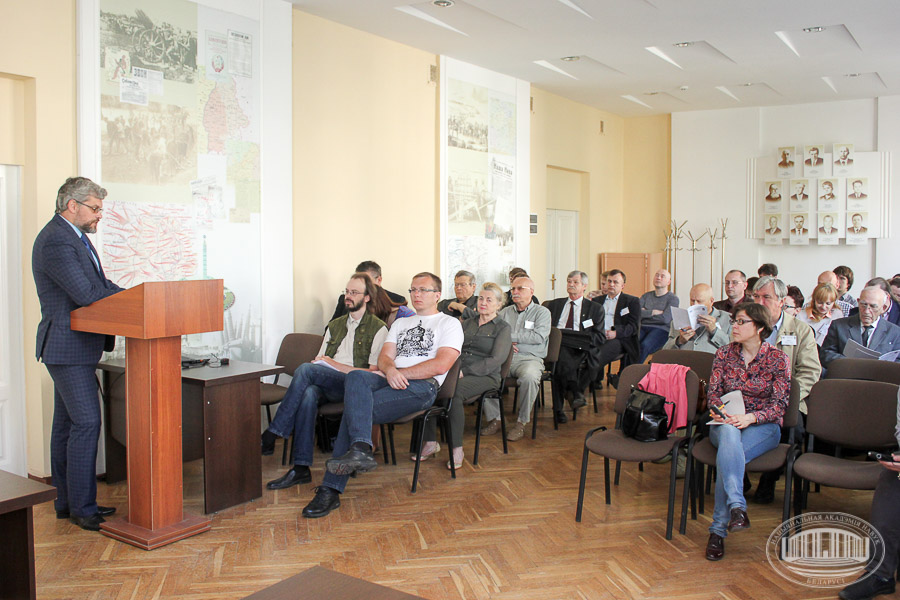 On May 12-13, 2016 International scientific and practical conference "Results of Archaeological Research on the Territory of Belarus in 2015" is held at the Institute of History of NAS of Belarus

On May 12-13, 2016 the International scientific and practical conference "Results of Archaeological Research on the Territory of Belarus in 2015" was held at the Institute of History of the NAS of Belarus. The conference was attended by Belarusian and foreign scientists from Russia and Ukraine.

The Deputy Director for Science of the Institute of History of the NAS of Belarus, candidate of historical sciences, associate professor Vadim L. Lakiza presented the report on the review of the legislation of the Republic of Belarus in the field of protection of the archaeological heritage, as well as the changes aimed at combating the illegal search of archaeological artifacts and selling them. The report had been discussed by scientists in connection with the adoption of the Decree of the President of the Republic of Belarus №485 dated 14 December 2015.

Considerable interest was aroused by reports of the Head of the Centre for the history of pre-industrial society of the Institute of History of the NAS of Belarus, Doctor of Historical Sciences, Professor Olga N. Levko on new facts regarding the archaeological research of the unique medieval complex Cordon in Podvinie, of the Deputy Director for scientific and innovative work of the Center for Belarusian Culture, Language and Literature Research of the NAS of Belarus, Doctor of Historical Sciences Sergei P. Vityaz on the use of special techniques in the study of objects of historical and cultural heritage, and associate professor of historical faculty of the Brest State University named after A.S. Pushkin, candidate of historical sciences Alexander A. Bashkov on the results of the study of the medieval burial ground in the territory of Kobrin fortification of the Brest Fortress.

Only at two scientific sections of the forum more than 60 reports were presented and the results of the work of archaeologists, which was held in all regions of the country and in Minsk, were considered.

Scientific publications related to archaeology were demonstrated at a specially organized book exhibition and unique archaeological artifacts from the Stone Age to the Middle Ages and Modern period were presented at archaeological departments.