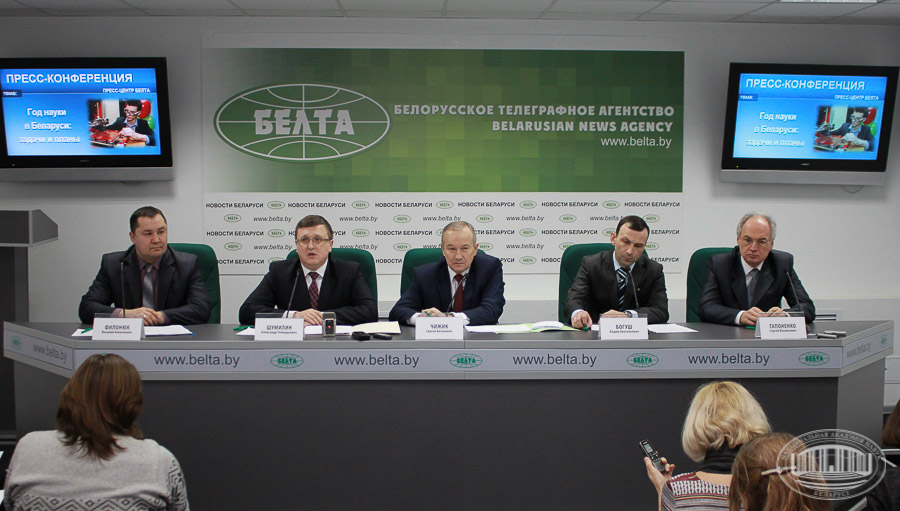 Press conference on "Year of Science in Belarus" takes place

On December 26, 2016 a press conference on "Year of Science in Belarus" took place in BELTA press center. The event included presentations by Sergei Chizhik, First Vice Chairman of the NASB Presidium, Alexander Shumilin, Chairman of the State Committee on Science and Technology of the Republic of Belarus, Vadim Bogush, First Deputy Minister of Education of Belarus, Sergei Gaponenko, Director of the Executive Board of the Belarusian Republican Foundation for Fundamental Research of the National Academy of Sciences, and Vasil Filonyuk, Head of the Department of science of the Ministry of health of Belarus.

Sergei Chizhik noted answering questions of journalists that Belarus plans to revise tariff rates of remuneration the tariff rate of scientists. He also believes that it is necessary to develop such a direction, as a scientific business. Sergei Chizhik said that the amount of currency earned by the National Academy of Sciences in 2016 will be kept on the level of 2015, when it exceeded $40 million.

Presidential Decree declared 2017 as the Year of Science in Belarus. This decision was taken to increase the role of science in implementing tasks of social and economic development of the country, creation favorable conditions for preserving and development of scientific potential, formation of the international image of Belarus as a country with a high level of intellectual and human capital. In the Year of Science activity of the Government, the National Academy of Sciences of Belarus, Executive authorities, industry organizations will focus on the development of domestic science schools, university and industrial science, support creative young scientists and specialists. Interaction of science with social services and economic branches, innovation, international scientific and technical cooperation were determined as an important part of their activity.