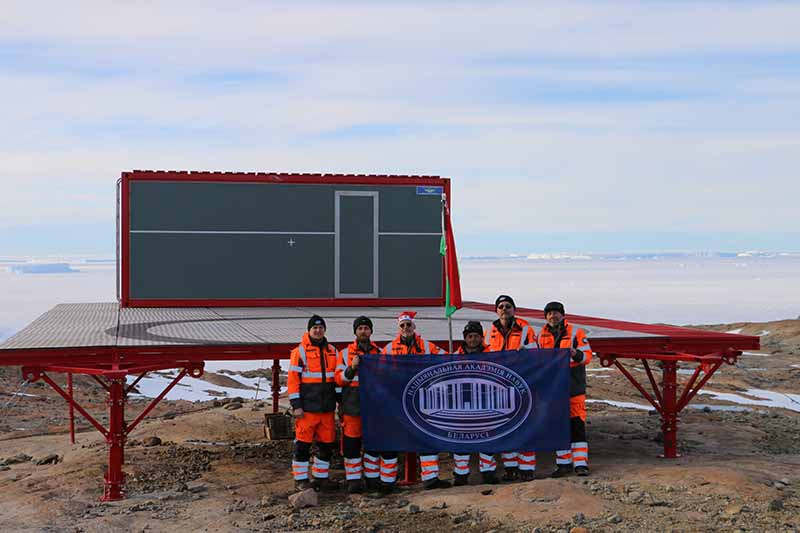 By now the members of the expedition have managed to assemble a platform and one of the sections of the second structure of the Belarusian Antarctic station. Successfull disembarkation of the expedition members and logistical support became possible due to high professionalism, clear and well-coordinated work of the NAS of Belarus team, Belarusian and Russian polar explorers, and Akademik Fedorov vessel and helicopter aircraft crews.

The Belarusian polar explorers have started working in standalone mode and began the implementation of the scientific research programme which includes a wide range of works at the Belarusian station and at several Russian Antarctic stations. In particular, integrated terrestrial and satellite monitoring of the atmosphere and the surface of Antarctica will be done. Spectrum equipment of the Belarusian satellite BKA and the Russian satellite Canopus-B will undergo radiation calibration using the snow surface of Antarctica. The specialists will comprehensively examine and evaluate the possibility of using the local biological resources, biotic components of the environment will be monitored. Some natural environment and climate-related researches of Enderby Land in East Antarctica and the surrounding area under the influence of natural and anthropogenic factors will be done. Basic meteorological parameters will be registered, etc.

The ceremonial start of the current Belarusian Antarctic Expedition (BAE) was given at the National Academy of Sciences of Belarus at the end of October 2016. In early November about 40 tonnes of expedition cargoes, including parts of the second structure of the Belarusian Antarctic station, were shipped from Minsk to Saint Petersburg and then loaded onto the Akademik Fedorov research vessel. In mid-November the BAE personnel started the journey to Antarctica.