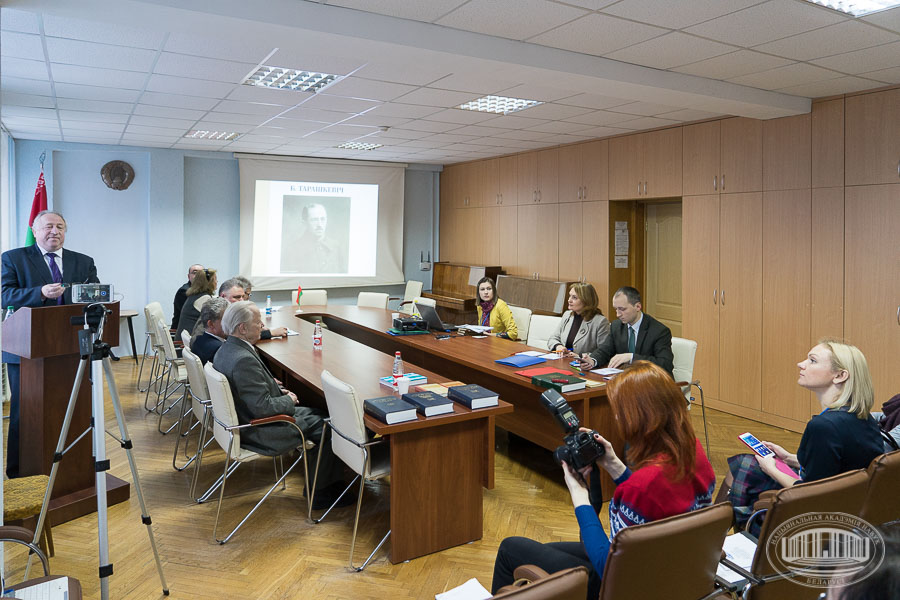 On January19–20, 2017 the Yakub Kolas Institute of Linguistics of the NASB Center for Belarusian Culture, Language and Literature Research hosted the International Scientific Conference on Belarusian grammar from Bronislaw Tarashkevich till nowadays, devoted to 125th anniversary of the famous Belarusian linguist, public and political figure, publicist and literary critic, Academician BronislawTarashkevich.

During the conference, speakers comprehensively discussed the role and importance of the "Belarusian Grammar for Schools" by Bronislaw Tarashkevich and the personality of the author in formation, development and improvement of the Belarusian literary language throughout the twentieth century. They also considered features of current functioning of the Belarusian language and perspectives of its distribution into main spheres of communication in the country.

At the conference a round table on the role and place of Bronislaw Tarashkevich in the Belarusian national revival was held.The video presentation "Following Roads of Life and Searches of Bronislaw Tarashkevich", prepared by Valentina P. Rusak, Veronika A. Mandik, Olga V. Rusak, was demonstrated. The participants of the round table could listen to the record of the conversation with the famous researcher of the scientist’s life and career Arsen S. Lis which concerned tragic search of freedom by Bronislaw Tarashkevich. Aleksandr A. Lukashanets discussed sociolinguistic and political conditions for the formation of a new Belarusian literary language at the beginning of the 20thcentury, and its development and functioning throughout the 20th century and beginning of the 21st century. There also were other speakers at the round table.

The materials presented at the conference will subsequently be published in a volume of proceedings.

Conducting the International Scientific Conference dedicated to the memory of the Academician Bronislaw Tarashkevich has been a good beginning of a series of scientific activities of the Center in the Year of Science in the Republic of Belarus.