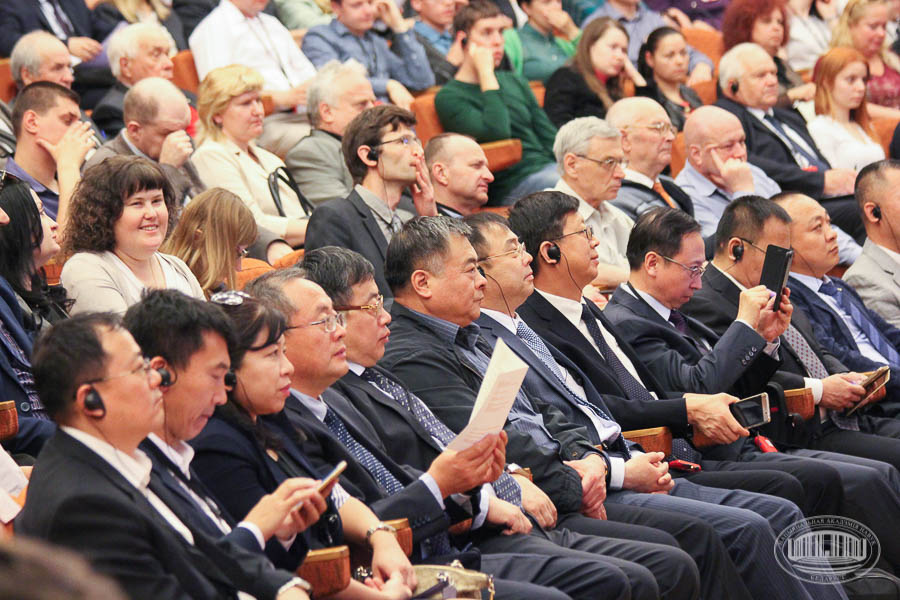 On 22 May 2017, the Belarusian-Chinese science and technology forum is held at the National Academy of Sciences of Belarus. The event is organized by the National Academy of Sciences of Belarus, the administration of the Chinese city of Harbin, the State Committee for Science and Technology of the Republic of Belarus, the Harbin Office for Science and Technology, the National Center for Technology Transfer (Belarus), the Heilongjiang Province Academy of Sciences. The event is organized within the framework of the Promotional Harbin International Exhibition of Scientific and Technical Achievements of the People's Republic of China in Minsk (May 21–26, 2017). Promising avenues and mechanisms of development of Belarusian-Chinese science and technology cooperation as part of the efforts to implement the One Belt, One Road initiative will be discussed at the forum. Over 400 scientists, experts, and specialists from Belarus and China participate in it.

Vladimir Gusakov, Chairman of the NASB Presidium, noted in his welcoming speech that the forum was a result of the recent invigoration of the activities pursued by the National Academy of Sciences of Belarus in association with partners from the People's Republic of China. “During the forum we are going to discuss a number of most important avenues and mechanisms, which will serve further expansion of mutually beneficial cooperation between Belarusian and Chinese organizations. We will discuss the issues of development of cooperation in the area of new materials and technologies, energy saving technologies, food industry, agriculture, civil engineering technologies, etc. Belarusian and Chinese organizations have picked out these areas as priority ones for the consequent implementation of joint scientific and technical projects,” he stated. Vladimir Gusakov also emphasized that "the Belarusian-Chinese scientific and technical forum, which is held in the year, declared the Year of Science in Belarus, will be an important stage in the development of scientific and innovative cooperation between the Republic of Belarus and the People's Republic of China, and it will ensure the formation of new mutually beneficial programs and projects in advanced fields of science and technology."

The National Academy of Sciences of Belarus attaches particular importance to cooperation with the People's Republic of China, which is a country with enormous scientific and economic potential. The Republic of Belarus has developed strong strategic relations with it in all areas. For the purposes of fruitful cooperation, the National Academy of Sciences of Belarus have signed a number of contractual documents with Chinese partners. Joint research centers and centers for transfer of technologies of Belarusian and Chinese scientific organizations have been created and function successfully.

The first Belarusian-Chinese science and technology forum was held in Minsk in October 2015. Such form of interaction between Belarusian and Chinese partners is becoming traditional. Scientists and specialists from Belarus and China every year consider a wide range of issues on expanding scientific and innovative cooperation. The next forum is to be held in Harbin.