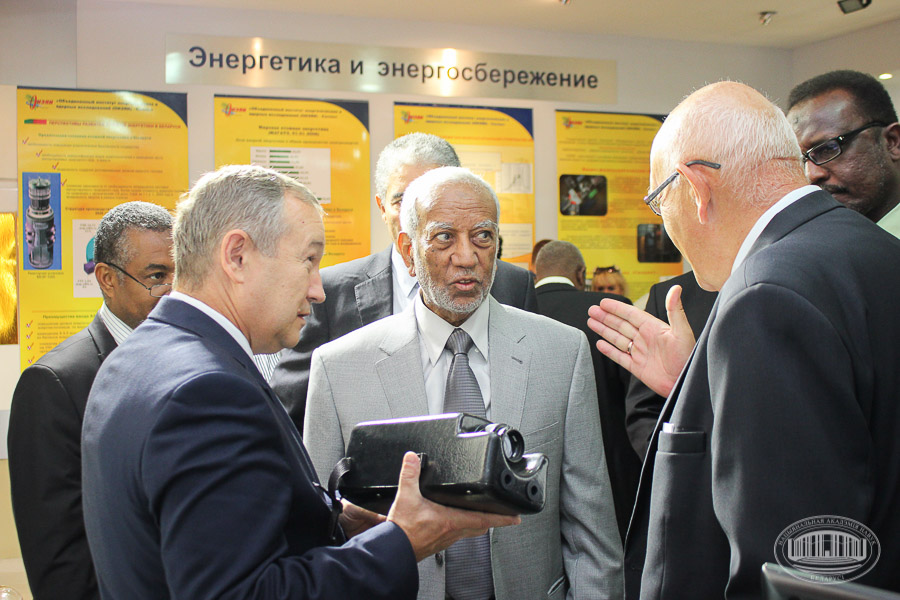 During the meeting Chairman of the Presidium of the National Academy of Sciences of Belarus Vladimir Gusakov noted that the Academy places importance on the advancement of mutually beneficial cooperation with Sudan. “Many scientific interests of Belarus and Sudan coincide. Organizations of the Academy work in the areas the Sudanese side is interested in. We are ready to provide all kinds of support in this matter,” Chairman of the NASB Presidium said.

Vladimir Gusakov suggested to the Sudanese side stepping up cooperation in the extraction and processing of mineral resources, in petrochemical industry and agribusiness technologies. “We can offer the latest technologies in agriculture, a wide variety of agricultural machines and complexes for remodeling Sudan's agriculture and putting it onto an innovation-driven development track,” Vladimir Gusakov emphasized.

In turn, Speaker of the National Assembly of Sudan Ibrahim Ahmed Omer confirmed that nowadays Sudan is particularly interested in Belarusian innovations in the field of agriculture, crop selection, in the latest agricultural machines and mechanisms. The Sudanese side is also interested in technologies for extracting and processing mineral resources, in power engineering, ways to improve the physical infrastructure available to the Sudanese research institutions, in the training of top-qualification scientists.

Chairman of the NASB Presidium suggested promptly putting together a protocol on expanding scientific and technical cooperation between the National Academy of Sciences of Belarus and Sudan as a result of the visit. “This document will become the foundation for broad, multilateral, mutually beneficial cooperation between scientific institutions of Belarus and Sudan,” he emphasized.

Speaker of the National Assembly of Sudan Ibrahim Ahmed Omer backed the proposal.

A list of innovative projects for mutually beneficial cooperation between Belarusian and Sudanese scientists had been prepared by the National Academy of Sciences of Belarus. The list was handed over to the Sudanese side.

This visit was a continuation of the dialogue on expanding of scientific and technical cooperation between Belarus and Sudan. On 7 August 2017, Sudanese delegation led by Minister of Higher Education and Scientific Research Dr. Somaya Mohamed Ahmed Abo Kashwa visited the National Academy of Sciences of Belarus. On 9 August 2017, after visiting the NASB Researchers Training Institute and holding negotiation agreements on cooperation in the sphere of development of higher education, research training and academic mobility of teaching staff and students were signed by the Rector of Researchers Training Institute of the NAS of Belarus Ihar I. Hancharonak and rectors of three leading universities in Sudan (Bahri, Al Neelain, Kassala).

A letter with a proposal to consider the possibility of a working visit of the NASB delegation for detailed discussion and formulating proposals on implementation of joint projects has been currently sent to Sudanese Higher Education and Scientific Research Minister.