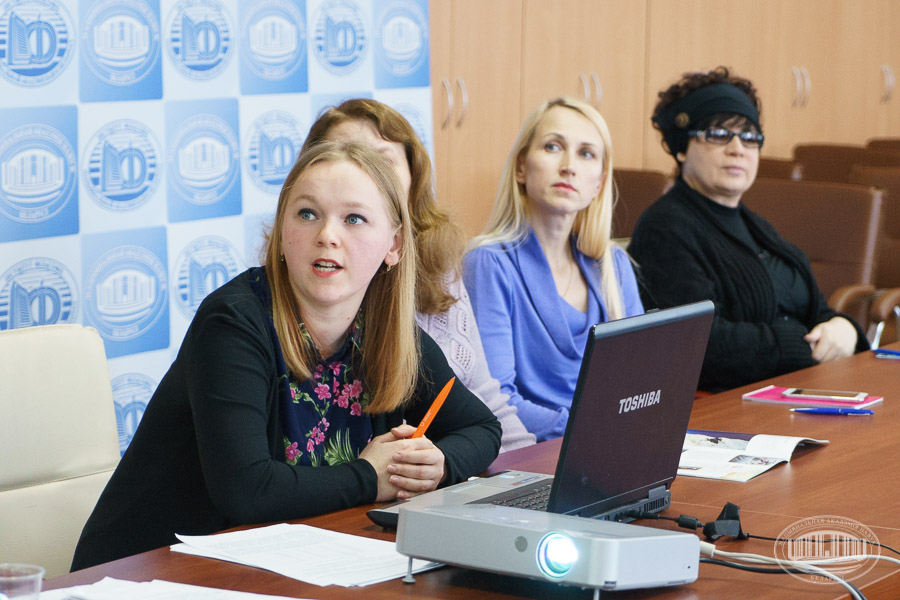 On 15 March 2018, a discussion with the participation of an invited expert was held in the Intellectual club "Women in Philosophy" at the Institute of Philosophy of the NAS of Belarus. The Intellectual club set the goal to create a platform for dialogue, to establish and expanse professional contacts between women engaged in philosophy.

At the meeting, the report on social and professional status of women scientists in academic science (based on the results of sociological research) by Alesya P. Solovey, researcher of the Institute of Sociology of the NAS of Belarus was discussed. The report considered various factors affecting the social well-being of Belarusian women scientists.

The relevance of this topic is related to the demand for the analysis of feminization of Belarusian science at the present stage of its development and determining the degree of influence of such factors as professional self-identification of women researchers, involvement in the scientific community, satisfaction with working conditions, and the availability of opportunities for promotion. Particular emphasis was placed in the report on issues related to the professional activity of women working at the Academy of Sciences, the specificity of their value orientations, the impact of marriage and motherhood, as well as gender stereotypes on their professional activities.

Based on the results of sociological research Alesya P. Solovey concluded that most women scientists of the Academy of Sciences consider scientific activity as their vocation and feel a sense of involvement in the scientific community. Besides, the desire to personally contribute to the development of science was mentioned as a factor that leads women to science. In addition, the meeting discussed the problems of women scientists: double burden (work and family), the need to combine professional and gender roles – researcher, mother and wife. The event demonstrated the effectiveness of work in the selected format. The report aroused interest and lively discussion.

According to the Club's participants, the discussion of the invited experts ' reports will allow to deepen the understanding of women’s role in philosophy, to reveal various aspects of the status of women in modern humanitarian science.