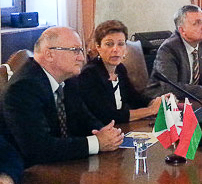 The Days of Belarusian science are held by the leaders of the Autonomous Region of Sardinia in cooperation with the University of Cagliari, the Global Community of Longevity and under the patronage of the Embassy of Belarus in Italy.

Official visits of the Belarusian scientific delegation accompanied by the Honorary Consul of the Republic of Belarus in Cagliari Giuseppe Carboni to the Presidium of the Autonomous Region of Sardinia and a meeting with the Head of the Department of International Relations of the Regional Government Giovanna Medde are scheduled.

An important part of the program's activities will be devoted to further development of cooperation in the field of research of longevity and nutrigenomics. For this purpose, a visit to a laboratory of the Global Longevity Community is scheduled for the Belarusian delegation. This organization was established in Sardinia to study and evaluate longevity issues and promote active lifestyles among the elderly.

The closing ceremony of the Days of Belarusian Science in Sardinia will take place in the meeting room of the Council of Deputies of the City Hall of Cagliari on June 9, 2018.