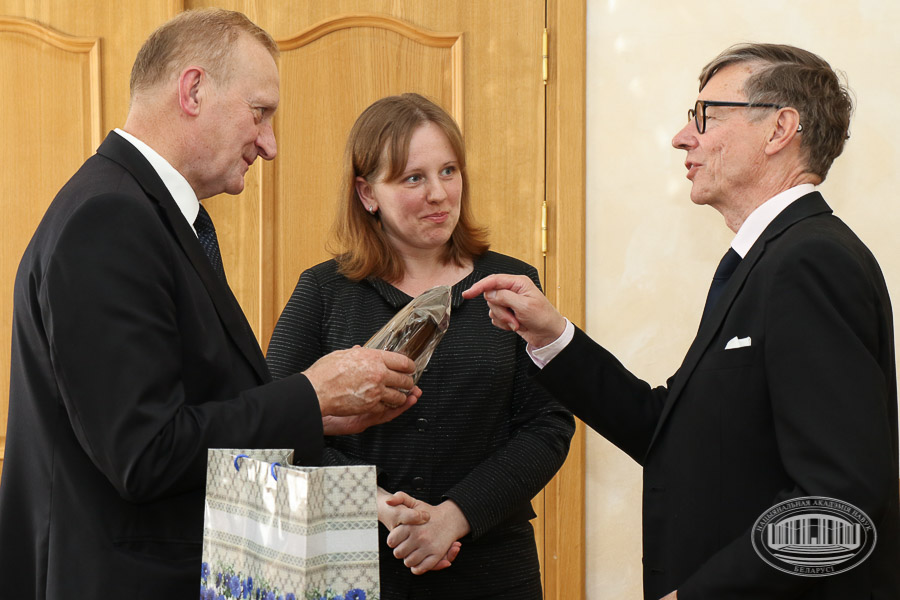 Chairman of the Finnish Society of Science and Letters Jukka Meurman noted that Finland would like to scale up cooperation across all areas of mutual interest. First of all, this pertains to cooperate between the Young Academy Finland and the Council of Young Scientists of the NAS of Belarus. “I think that our major task today is to support fledgling scientists. They are our future. And cooperation should start from establishing close contacts between young researchers of our countries,” Yukka Meurman said. In his turn, Vladimir Gusakov noted that support for young scientists is a priority for the National Academy of Sciences of Belarus.

As a result of the talks, the Finnish and Belarusian sides noted that the two states already have a significant potential for strengthening cooperation. Yukka Meurman suggested drafting a memorandum of cooperation between the NAS of Belarus and the Finnish Society of Sciences and Letters. Vladimir Gusakov invited Yukka Meurman to take part in the session of the academies of sciences of Nordic countries to be held in Minsk at the end of the year.

Chairman of the Finnish Society of Sciences and Letters Jukka Meurman is visiting Minsk on 22-25 May upon the invitation of the National Academy of Sciences of Belarus. Today the guest got acquainted with the NASB permanent exhibition “Domestic scientific achievements for manufacturers”.

In addition, Yukka Meurman gave a lecture to the scientific community "Oral infections and systemic health"

Founded in 1838, the Finnish Society of Science and Letters is one of the oldest institutions in Europe. This is the Academy for all branches of science and education. Its goal is to promote high-quality research, to disseminate information through presentations, symposia and conferences, to publish research papers, award prizes, as well as to provide financial support, to promote national and international contacts and organize interdisciplinary discussions.

Dr. Meurman is professor emeritus at the University of Helsinki and head physician at the Department of Oral and Maxillofacial Diseases, Helsinki University Hospital, Finland. He is the author or co-author of numerous research publications. He has supervised 24 doctoral theses. Dr. Meurman has been assessor of research and education in several universities: Dresden, Geneva, Oslo, Amsterdam, Turku and Basel, Karolinska Institute (Stockholm). In 2004, Dr. Meurman received the title of “Docteur honoris causa” from the Louis Pasteur University (Strasbourg, France). Dr. Meurman is member ad hominis of the Royal Society of Surgeons (Edinburgh).