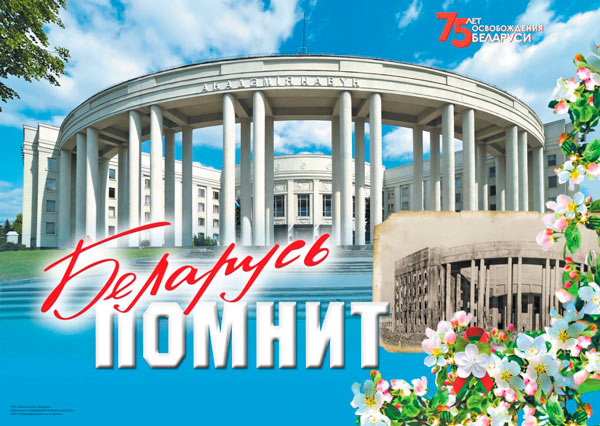 On behalf of the Presidium of the National Academy of Sciences of Belarus and myself, I congratulate you on the main national holiday, Independence Day. This year we celebrate it together with the 75th anniversary of Belarus’ liberation from the Nazi invaders.

July 3 is a day that truly unites all Belarusians. This historical date reminds us of the price our people paid for our independence.

We are proud that many scientists from the Academy of Sciences were among those who took part in Belarus’ liberation. We are grateful to all veterans for their feat. Your remarkable achievements in the war and post-war period allowed our country and the Belarusian people to achieve tremendous success in social and economic development. Without them, Belarus would hardly become a sovereign state. Having a past is the key to the strength of living generations.

The great feat of the people during the Great Patriotic War is of particular importance for modern history, forms the citizenship of the nation and strengthens a sense of patriotism. Every third Belarusian died during the Great Patriotic War. Broken human lives, the tragedy of families and devastation are the results of any armed conflict. It is especially important to remember this now when controversial issues are often resolved through armed conflicts.

Scientists of the National Academy of Sciences of Belarus carried out a series of events dedicated to the 75th anniversary of Belarus’ liberation. The largest one was the international forum "Operation Bagration", which brought together leading scientists from Belarus, Russia, Armenia, Azerbaijan, Germany and Lithuania. This scientific conference focused the efforts of many scientific and public organizations, educational institutions to preserve an objective memory of the events associated with the 75th anniversary of Belarus’ liberation from Nazi invaders, has become a landmark patriotic project.

The Belarusian people have their own rich culture and history. In recent years, humanities scholars have repeatedly shown this not only to Belarusians but also to foreign sceptics. The multi-volume edition "Belarusian Statehood History", which is a work in progress, is vivid evidence of this especially in the Year of the Small Motherland.

Belarus has something to be proud of. The latest confirmation is the 2nd European Games recently held in Minsk, gathered thousands of fans and guests from dozens of European countries. This sports festival brought together people of different nationalities, and, most importantly, demonstrated the bright achievements of our country.

Peace, Freedom and Independence are the three highest achievements of our people. Our task is to preserve and pass them onto descendants.

I sincerely wish you all good health, peace and prosperity.

Vladimir Gusakov,
Chairman of the Presidium of the National Academy of Sciences of Belarus