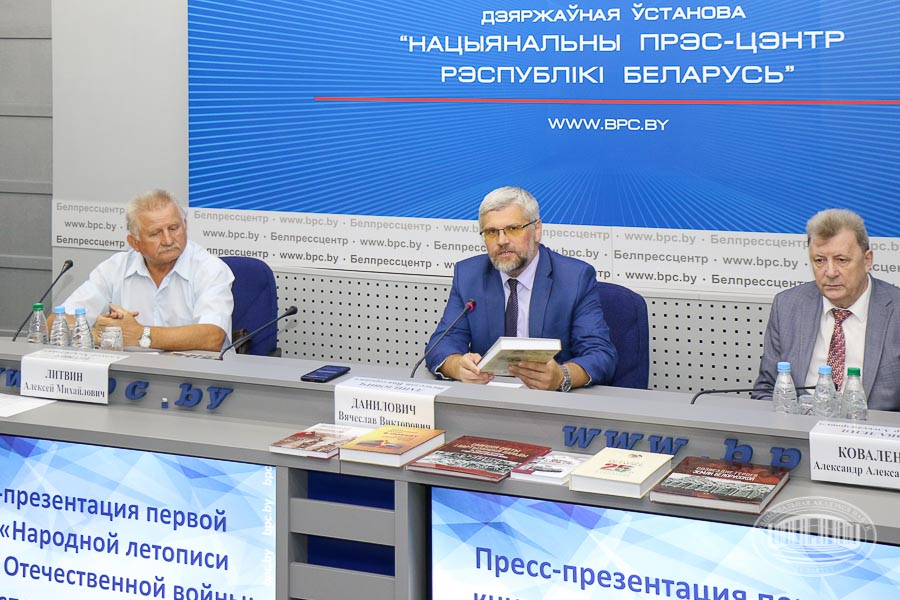 On the 8th of July, 2020, the National Press Centre of the Republic of Belarus hosted a press presentation of the first book “National Chronicle of the Great Patriotic War: We Remember Everyone!”. The event participants included Alexander Kovalenya, the Academician Secretary of the Department of Humanities and Arts of the NASB, Vyacheslav Danilovich, the Director of the Institute of History, and Alexey Litvin, the Head of Military History Department of the Institute of History.

The campaign aimed at creation of the national chronicle was initiated by the National Academy of Science in March and immediately elicited response from the Belarusians. The first National Chronicle book covers 40 materials received by the Institute before the others. As a rule, one material describes contributions of a few people into the Victory, therefore the publication, as a whole, tells about 60 war participants. Scientific documents, maps, materials of literature and figurative arts were also used for the book preparation, apart from personal archives.

Director of the Institute of History Vyacheslav Danilovich said: “The campaign is long-running, and we continue to collect the materials. You can send them by email or ordinary mail or bring them directly to the institute. Today, we have received more than 200 responses, including those from Russia”.

Academician Secretary of the Department of Humanities and Arts of the NASB Alexander Kovalenya informed that online meeting of the CIS historians had been held on the 7th of June, 2020. The meeting involved discussion of the results of Belarusian research devoted to the period of the Great Patriotic War. “We sent a proposition to the Institute of World History of the Russian Academy of Sciences about joint creation of a course- or textbook for teachers and students of higher educational establishments of the CIS countries. I believe that this work will be performed”.