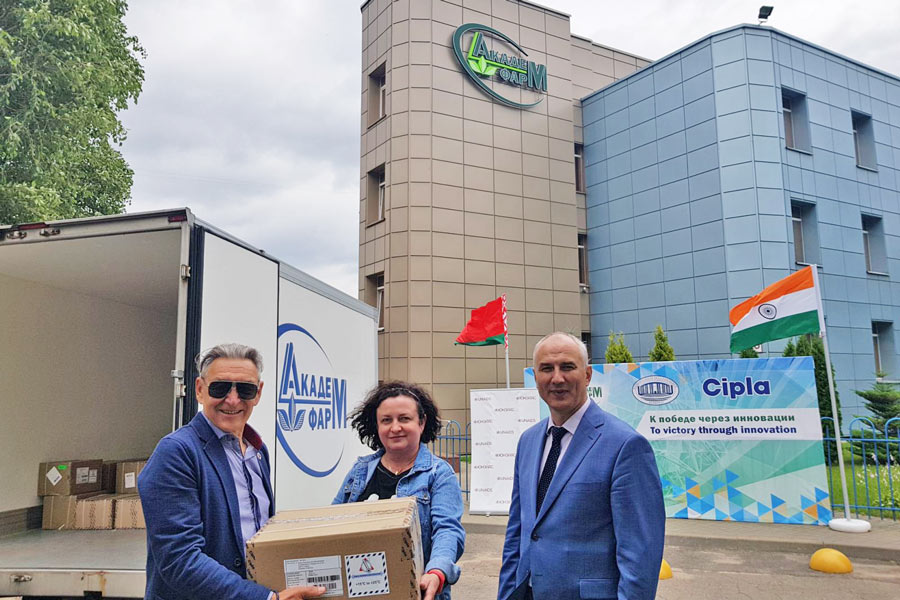 A batch of expensive anti-HIV drugs was delivered to the State Enterprise ACADEMPHARM of the NASB on the 10th of July, 2020. It was a gift from the major Indian pharmaceutical company Cipla Limited and personally from Dr. Yusuf Khwaja Hamied, the Chairman of the company’s board and Honorary Member of the National Academy of Sciences of Belarus. The total of 6 thousand packages of anti-HIV drugs (Tenvir-EM and Viraday) for the amount over 35 thousand US dollars was delivered.

Dr. Lalit Chokhani, the Honorary consul of the Republic of Belarus in India, rendered an active assistance in the humanitarian aid organization and delivery.

The air delivery and storage at a customs warehouse were financed by the Joint United Nations Programme on HIV/AIDS (UNAIDS). The State Institution ACADEMPHARM of the NASB provided documentary securing of the humanitarian aid import.

For many years, the NASB have been actively cooperating with Cipla Limited, one of the leading Indian companies. The NASB and Cipla Limited agreed to organize local manufacturing of efficient and safe medicines for treatment of socially significant diseases: HIV infection, hepatitis B and C, as well as Alzheimer's disease and arterial pulmonary hypertension.

Dr. Yusuf Khwaja Hamied is one of the leading Indian scientists and Chairman of board of Cipla Limited founded by his father in 1935. Outside the Indian territory, Hamied is known for his strive to provide drugs for treatment of AIDS and other serious diseases in in many сountries of the world. On the 16th of November, Dr. Yusuf Khwaja Hamied was unanimously pronounced an Honorary Member of the NASB during the General meeting of the National Academy of Sciences.