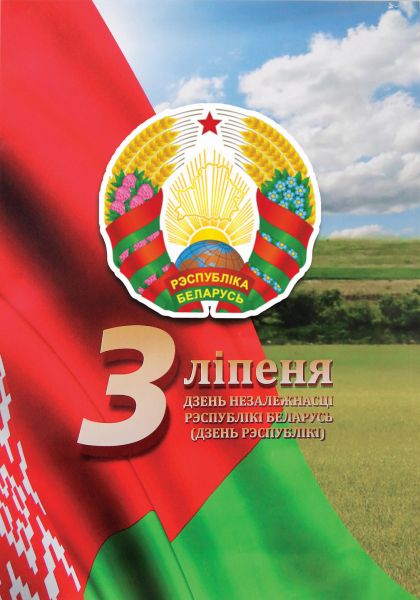 Dear colleagues, dear veterans!
I congratulate you on the main holiday for the entire Belarusian people – Independence Day!

The date of July 3 went down in the history of our country as a bright page of the heroic valor of front-line soldiers at home front workers, partisans and underground fighters who won freedom for their people, defended the independence on the Motherland. Among those who took part in the liberation of Belarusian towns and villages from the Nazis, there were many employees of the Academy of sciences. And today their children and grandchildren work in the organizations on the NAS of Belarus. Our contemporaries adequately continue the traditions of the immortal feet are the generation of the Liberators, and confidently look of the future.

Unfortunately, today our state is subjected to rough pressure from the outside from various destructive forces. An important condition for a successful fight against it in the unity of our people, which is based on patriotism and love for our Motherland. Patriotism is an eternal venue that connects the past, present and future of our people. “Patriotism, noted A.R. Lukashenka at the VI Belarusian People’s Assembly, cannot be taught. One can only show an example by his sincere love for his native land, pride in the achievements of his people, respect for the historical heritage, respect for the traditions and values of many generations of Belarusians, concrete deeds for the good of the country”.

Today a lot of falsifications are being fabricated, according to which the occupiers and aggressors are presented as almost liberators. But our historians have convincingly proved that the II World War was waged to destroy the Soviet people, including the Belarusians. A striking confirmation is the All-Belarusian action “People’s Chronicles of the Great Patriotic War: we will remember everyone!” Initiated the NAS of Belarus. As long as we do not forget and actively defend historical facts, as long as we thank the war veterans for their courage, our country and the entire progressive world will also remember this.

July 3 is not only a reminder of the path of freedom and independence that Belarusians have traveled together with other fraternal peoples, but also a reliable basis for moving forward. National interests, greatness of dignity of every citizen – in the awarness of indivisible unity with the fate of their country, in solidarity, in the understanding of work for the good and the Motherland and your family as a factor of personal happiness.

Republic Day is joyful holiday, a symbol of devotion to the Motherland, hope and optimism. We must preserve the most valuable thing that was one in 1944 – peace, freedom and independence of our country.

I sincerely wish you all good health, peace and prosperity.
Happy holiday, dear veterans and colleagues!

Vladimir Gusakov,
The Chairman of the Presidium of the NASB, Academician