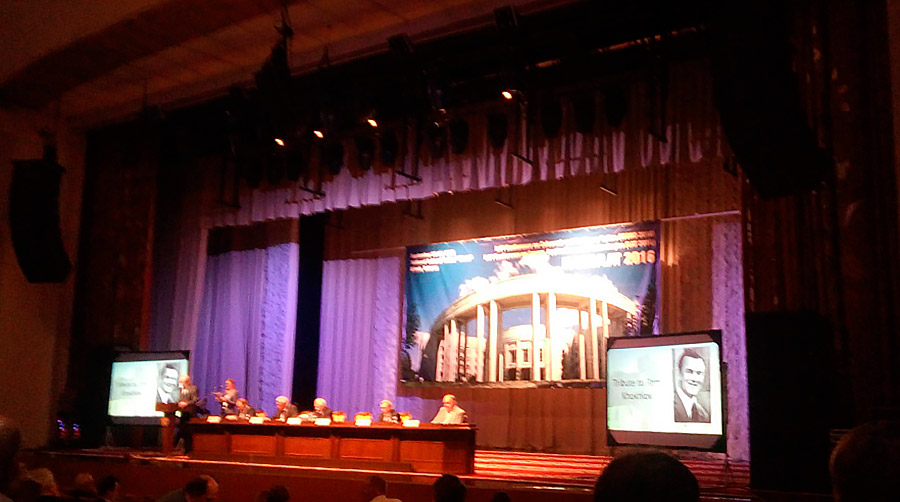 BelTA informs that the President of Belarus Alexander Lukashenko sent greetings to the participants of the International Conference on Coherent and Nonlinear Optics, Lasers, Applications and Technologies (ICONO/LAT-2016) that is held in Minsk. The greetings say, ‘I cordially welcome you in the Belarusian land. Selection of our country for such a representative Forum means recognition of the significant contribution of Belarusian physicists to the development of today's most advanced areas of science and technology’.

On September 26, 2016 the grand opening of the International Conference on Coherent and Nonlinear Optics, Lasers, Applications and Technologies (ICONO/LAT-2016) was held in the "Minsk" concert hall. The Belarus President Alexander Lukashenko greetings were read by the Chairman of the Council of the Republic of the National Assembly Mikhail Myasnikovich at the ceremony. The Chairman of the NASB Presidium Vladimir Gusakov addressed welcoming speech to the Forum participants.

On September 26-30, 2016 the 21st International Conference ICONO/LAT is being held in Minsk. It is organized by the National Academy of Sciences of Belarus together with the Russian Academy of Sciences and the Lomonosov Moscow State University and supported financially by the NAS of Belarus, the RAS and the Belarusian Foundation for Fundamental Research. The B.I.Stepanov Institute of Physics of the NAS of Belarus acts as a direct organizer from the NASB side.

The ICONO Conference will discuss the latest advances in physics of lasers, quantum and atom optics, ultra-fast processes, non-linear dynamics of optical systems, optics of nanostructures, optical diagnostics and processing of information, plasmonics, metamaterials physics, terahertz technologies and applications. The LAT Conference will consider problems of practical application of lasers, LEDs and laser technologies in various fields of economy and science, including improvement of laser technology, high-precision laser measurement systems, creation of new methods of synthesis and processing of materials, optical information technologies, use of lasers and LED technology in medicine, agriculture, and ecology, and solar energy problems.

About 500 representatives of leading laser research centers of Germany, France, Italy, Austria, Denmark, Great Britain, Switzerland, Sweden, USA, Canada, Mexico, China, Japan, as well as representatives of almost all the leading scientific organizations of the former USSR and the Republic of Belarus who continue to work actively in the field of laser physics and optical technologies are participating in the Conferences.