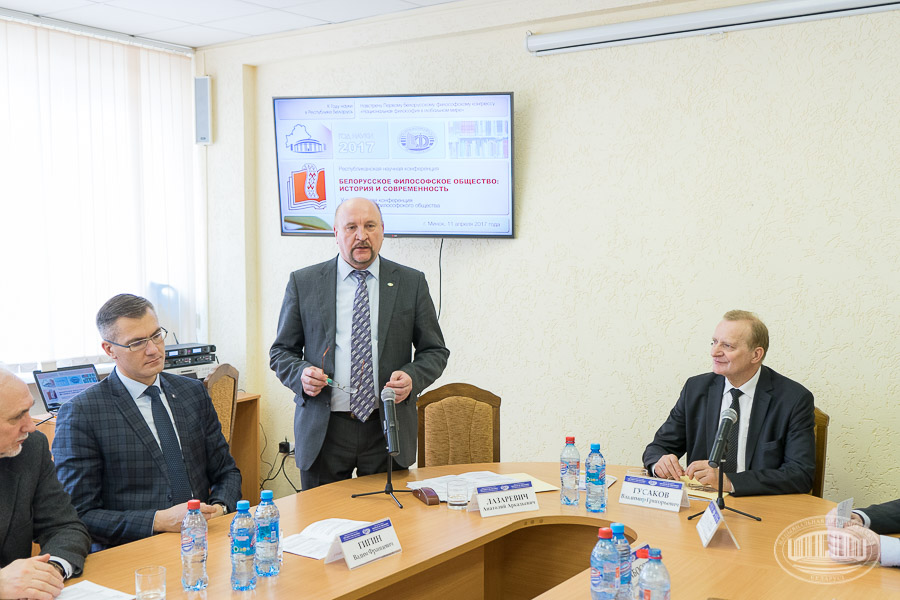 On April 11, 2017 the Republican scientific conference "Belarusian Philosophical Society: Past and Present" was held at the Institute of Philosophy of the NASB. It gathered leading philosophers of the NASB, representatives of Philosophy and Humanities departments of different Minsk and regional universities of Belarus. During the conference, topical mechanisms for the development and popularization of philosophical knowledge, organization of scientific and humanitarian discussion as well as the implementation of new research and publishing projects were considered. The welcoming speech of the Chairman of the NASB Presidium Academician Vladimir G. Gusakov and the introductory report of the Director of the Institute of Philosophy Anatoly A. Lazarevich drew attention of the audience to these topics. In their speeches, they both noted the key role of philosophical knowledge in the country's intellectual culture dynamics and touched upon the issues of popularizing the national philosophical heritage as well as the actual results of the country's philosophical schools.

The creation of the Belarusian Philosophical Society became the main idea of the conference. It is going to be a public organization that will unite the interests of researchers, professors, postgraduates and undergraduates studying philosophy, as well as all those who are ready to contribute to the development of philosophical knowledge and its status in the sociocultural space of Belarus. The Belarusian Philosophical Society is called to become a platform for arranging interdisciplinary discussion, holding scientific forums, publishing books, carrying out research projects; it will also represent the philosophical community of Belarus among the philosophers’ associations of other countries.

This initiative was approved both on behalf of the Presidium of the NASB and on the part of the reputable guests of the conference - the governance of the BSU Faculty of Philosophy and Social Sciences, vice-rectors and heads of departments of other Belarussian universities. The decision on the establishment and state registration of the Republican Public Association "Belarusian Philosophical Society" was unanimously supported by the participants of the conference. They approved its charter and elected the presidium, which included delegates from the NASB, the educational system, the general public and business circles. The Society will be headed by the leading Belarusian philosopher, Academician of the NASB Yevgenii M. Babosov.